Grace Kelly – The Engagement Ring That Changed Her Life 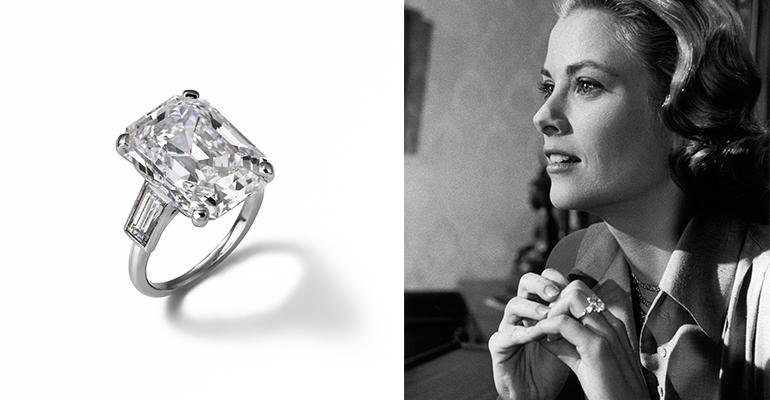 We all know the tragic story of Grace Kelly, the actress turned royalty, trading in the glamour of Hollywood for the posh allure of Monaco in pursuit of the love of her life, Prince Rainier. She passed away much too soon in a tragic car accident.

Prince Rainier asked for Grace’s hand with an eternity ring set with diamonds and rubies, designed by Cartier. When he noticed that other leading ladies in Hollywood walked around with bigger engagement rings, he quickly bought her another one. This ring is one to be reckoned with ––  dazzling 12-carat rectangular-cut diamond flanked by two baguettes. The breathtaking ring, with an estimated cost of 4.3 million dollars, later became Grace’s character Tracy Lord’s engagement ring in the film  ‘High Society’. The ring became an instant hit and many women received proposals with a similar design. The emerald-cut also spiked in popularity. High Society was Grace’s last movie. She was secretly hoping to continue her acting career, but Prince Rainier and her new royal responsibilities prevented her from doing so.

But what happened to Grace Kelly’s wedding ring? As she chose a Cartier ring, after Hitchcock introduced her to the brand, her ring was initially loaned to their New York boutique. Her real wedding room is now in the House of Grimaldi.

What are the most famous diamonds in the world?