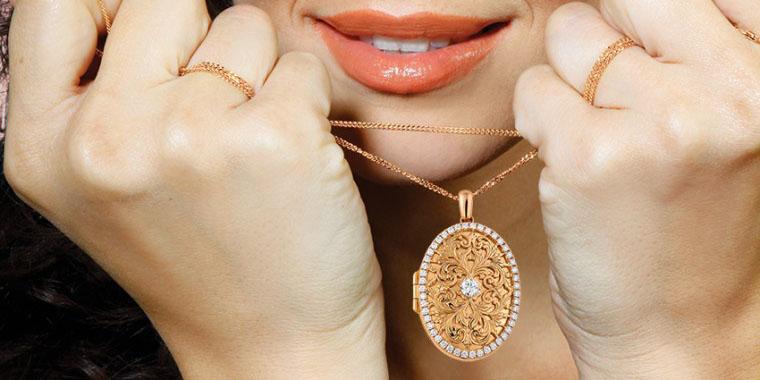 Modern jewellery design is not automatically reminiscent of the look of jewellery from past centuries but on closer inspection, it uses many stylistic elements that were already popular in the 19th and 20th centuries. In this respect, modern jewellery and diamond jewellery is often more traditional than appears at first glance.

The Biedermeier period, the first half of the 19th century, was marked by straightforward and smooth shapes in contrast to the opulent shapes of earlier times. In the following period of Historicism, starting around 1850, this trend was reversed; many elements from long gone eras were picked up in art, architecture and even furniture and jewellery. It is not without reason that style pluralism is mentioned; a large variety of different trends and styles were characteristic of the 19th century, often based on Greek, Roman, Etruscan motives or Renaissance and Rococo ideals, which is why terms like Rococo Revival and neo-Renaissance are sometimes used.

Art nouveau radically broke away from old patterns and traditions. Flowing shapes, floral patterns inspired by nature are typical of art nouveau; a playful combination of different elements. Diamond jewellery from this period usually has very rich decorations and patterns; the precious stones formed only a small part of the opulent ensemble.

After the First World War, the very emotional and carefree art nouveau style was replaced by the more clear and straightforward shapes of art deco: pragmatism and simple elegance. An important element was strong colour contrasts; diamond jewellery notably combining white stones with black onyx, black and white diamonds or blue sapphires. Bauhaus-inspired jewellery can also be found in the late art deco period, characterised by special practicality and shapes that are orientated towards the architecture of the time.

From around 1950, jewellery design returned to the style of previous eras, hence the name Vintage. In contrast to today's commonly used definition, this does not mean refurbished, used, old jewellery, but rather jewellery that has been orientated as closely as possible to a bygone era.

Modern jewellery design is diverse, often combining elements of different styles instead of just imitating them. There has also been a clear advance in quality, especially when it comes to diamond jewellery, with the introduction of the brilliant cut, which allows diamonds to shine in an unprecedented way, as well as perfected methods for setting diamonds. As a result, jewellery designs are now possible that failed to meet the technical requirements of the middle of the last century.