The Largest and Most Famous Diamonds In the World 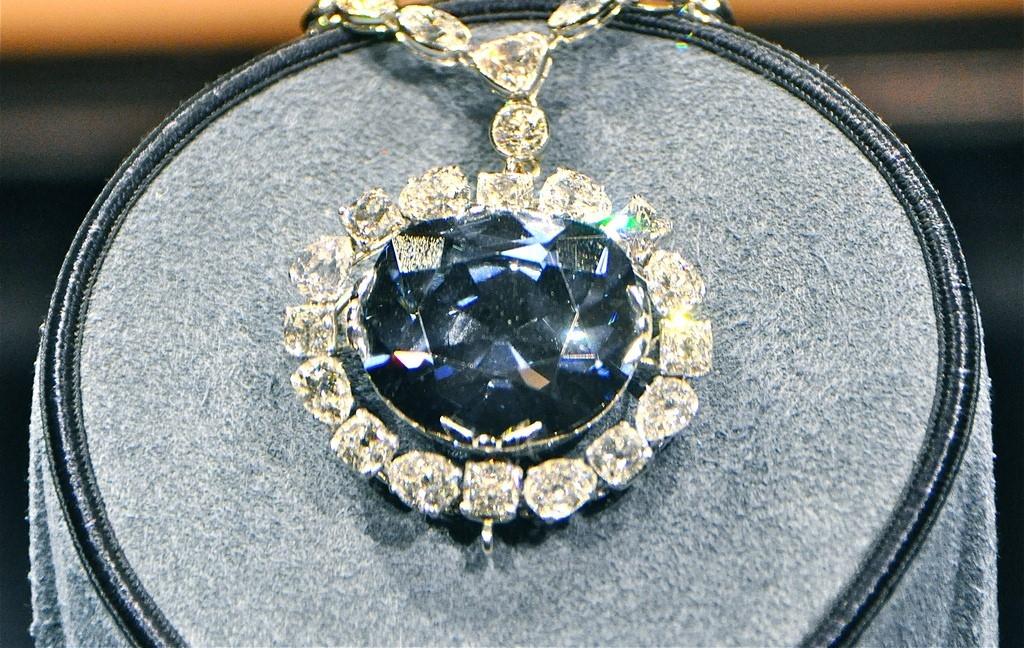 The timeless beauty of diamond jewellery has many lovers in awe, and they are willing to pay staggering amounts for their favourite stones. Some might not want to settle for less than the largest diamond engagement ring or biggest diamond earrings. You might be wondering, however, what is the biggest diamond ever found? Here are some of the largest diamonds in the world, as well as some exclusive jewels of inestimable value for you.

Top-5 Largest Diamonds In The World

The average diamond size that BAUNAT sells in our jewellery is 1 to 3 carats. The biggest diamonds in the world are several times that size, and of inestimable value. Let's introduce you to the top 5 largest diamonds ever.

The Cullinan is considered the largest rough diamond ever found and is the source of 105 famous diamonds, including the famous Cullinan I and the Cullinan II. This diamond was discovered in Premier Mine near Pretoria, South Africa in 1905 and weighed a stunning 3106.75 carat before the diamond was cut into 105 different diamonds by the Asscher brothers from Amsterdam.

The Lesedi La Rona, or ‘Our Life’ in Tswana (the language of Botswana), is the second-largest colourless diamond in the world. The rough diamond was found in the Karowe mine in 2015 and weighed 1,109 carats. A year later, the rough stone was sold for $53 million.

With a scale of 995.2 carats, the Excelsior Diamond takes third place in the line-up. Found in South Africa, it took a long time for the diamond to be sold. Apparently, there was no one who could afford it. After some time, it was sent to Amsterdam to be cut into 10 smaller precious stones. The largest diamond, Excelsior I, was eventually sold for $2.64 million.

4. The Star of Sierra Leone

The Star of Sierra Leone of 968.9 carats is the largest diamond ever extracted from the mine with the same name. It was soon sold to Harry Winston for a $2.5 million spot price, who had it cut in 17 separate diamonds. The largest precious stone left was still 54 carats.

This stone, the size of two golf balls, weighs a pretty 910 carats and thus takes fifth place. The diamond is not only very large but also has a D-colour sorting and an IIa clarity score. These are the best scores a colourless diamond can get.

The colorless Internally Flawless diamond of 56.15 carat was originally part of the legendary Cullinan. The diamond was put to auction by Christie’s on Valentine’s Day 2011. That’s where the romantic nickname ‘Love at First Sight’ came from. The current owner paid nothing less than 11 million dollars for it.

The largest diamond in the universe

The largest diamond in the universe is not on Earth, but in space. In 2014, a dwarf star was discovered dotted with diamonds. We'll never be able to use the star to process it into jewellery.

The world's largest coloured diamond was found in 1985: the Golden Jubilee Diamond. It is a brown diamond of 545.67 carats and was discovered in the famous Premier Mine in South Africa. It was only found in 1985 and took over two years to cut the rough diamond into its current shape.

The largest pink diamond in the world

The largest pink diamond in the world is the Daria-I-Noor. It weighs about 182 carats and is part of the Iranian crown jewels. The diamond was originally found in India. As far as quality is concerned, it's not the best pink diamond. That honour befalls the vivid pink diamond Pink Star.

The largest blue diamond in the world

The world's largest blue diamond was discovered in Botswana in April 2019. The rough diamond weighed 41 carats, the cut stone weighs 20 carats. This stone was named the Okavango Blue, after the Okavango Delta in Botswana.

The famous Tiffany diamond is the largest yellow diamond in the world. It was discovered in 1888 in the mine of De Beers, the largest diamond company in the world. It is the seventh largest coloured diamond in the world. New York jeweller Tiffany and Co bought the exceptional stone that was cut into a pillow shape and bears witness to excellent craftsmanship. But it is the wearers of this expensive gemstone that ensured the diamond became a world-famous diamond. That honour was only bestowed on two women. One was Mrs Sheldon who wore it at the Tiffany Ball in Newport, the other was Audrey Hepburn who shined in the blockbuster Breakfast at Tiffany's in 1961.

Top-5 Most Expensive Diamonds In The World

The Koh-i-Noor was found in the Kolkonda mine in India and now weighs 109 carats. Koh-i-Noor means 'mountain of light' in Persian. That name came from the Persian general Nadir Shah who shouted this out when he saw the diamond. How much the Koh-i-Noor is worth, is unknown. This is undoubtedly a diamond of indefinable value. The diamond is now incorporated into the crown of Queen Elizabeth II and can be admired in the Tower of London.

Read more about the exclusive collections of crown jewels

Another invaluable diamond is the Sancy diamond. This diamond first emerged in 1477 and has since been at the centre of many an intrigue, thefts and violence. It was in the hands of the Portuguese, the French court and the British royal family over the years. Today you can admire this exceptional diamond at the Louvre in Paris.

You know the third most expensive diamond in the world already: the raw Cullinan diamond. This rough diamond would have been worth about $400 million before it was cut into the Cullinan I, Cullinan II and about a hundred smaller diamonds.

The Hope diamond worth $350 million cannot be left out in this section. It is the rare blue colour that bestowed the well-deserved fame on the expensive stone. Because the diamond was once owned by Sun King Louis XIV, it was named 'Le bleu de France'. It was only since 1830 that the stone was called the Hope diamond, named after its London owner at the time.

It is said there is a curse on the Hope diamond that brings misfortune to the wearer. The first stories of a possible curse surfaced in 1909.

The De Beers Centenary Diamond weighs 273.85 carats and is worth around $100 million dollars. It was found in 1986 and put on public display in 1991. As the name suggests, it was found in the Premier Mine operated by De Beers in South Africa.

There are so many diamonds with exceptional qualities, they cannot all be listed in the top 5 of the world's largest, most expensive or best-known diamonds. We would like to show you a few more diamonds worthy of introduction.

At 189 carats, the Orloff diamond is one of the largest precious stones in the world. The stone is of Indian origin but is now in the Kremlin's diamond collection. The diamond used to be in the scepter of the Russian empress Catharina the Great.

The Regent diamond is a 141 carat diamond that you can now view at the Louvre. This diamond carries a whole history with it and according to some legends, it is even cursed. The diamond used to be in the French royal crown.

The Taylor-Burton diamond was owned by the famous actor couple Richard Burton and Elizabeth Taylor in 1969. The diamond weighs 68 carats and the necklace in which the diamond is set, was specially designed to hide Taylor's tracheotomy scar. In 1979, the diamond was sold to the famous jeweller Robert Mouawad.

The Millennium Star is a diamond of De Beers and the largest pear-shaped diamond in the world. The cutting process lasted more than 3 years. This diamond was found in the Congo in 1990 but was only put on public display in 1999 at the London Millennium Dome.

The Oppenheimer Blue is a 14.62 carat blue diamond that was sold at an auction for $50.6 million in 2016. That was a record at the time, but the Pink Star broke the record again in 2017. The well-known British diamond expert Philipp Oppenheimer used to own the diamond, but the current owner is not known.

The biggest and most famous engagement rings in the world

Celebrities are often known for flaunting spectacular jewellery, especially engagement rings. That's why we're introducing some to you.

One of the biggest and most famous engagement rings in the world is Lady Di's engagement ring. At Prince Charles' engagement in 1981 to Lady Diana Spencer, all tabloids turned their cameras on the stunning white gold engagement ring with 14 solitaire diamonds, surrounding an 18-carat blue sapphire. Even after the divorce, Diana didn't take the ring off her finger. The ring doesn't contain the largest diamond in the world, but it is certainly unique!

Anyone willing to put down $38,488 could buy the same design at the diamond expert

When Diana died in a traffic accident in Paris in 1997, her son Harry got hold of the engagement ring. He then gave it to his brother William. He completed the circle by asking the hand of Kate Middleton in marriage. As a result, the sapphire engagement ring is still popular today.

Pop Star Beyoncé received a stunning platinum engagement ring of about $5 million designed by Lorraine Schwartz. The ring is set with an 18 carat colourless diamond. The two are still happily married and have three children.

Audrey Hepburn is known for her simple but refined and elegant style. The engagement ring she received from her first husband Mel Ferrer was perfectly to her taste. The eternity ring in platinum was set with a baguette cut diamond in a canal setting. At the wedding, she got two more stacking rings for a refined and balanced look.

One of Marilyn Monroe's most famous jewellery pieces is her engagement ring. It consists of baguette cut diamonds that are set in an eternity band. Baseball star Joe DiMaggio proposed to her during their holiday in San Francisco, where they were also married in the local town hall two days later.

Elizabeth Taylor received the most expensive jewellery from her husband Todd Taylor, and that started with a huge engagement ring. She liked it so much, she was already wearing it before she was divorced from her previous husband, Michael Wilding. She called the ring 'My Ice Rink' and carried it for a long time after her husband's death. Even with new partners.

The most expensive engagement ring